I’m terrified of free soloing. Absolutely afraid. No matter how hard or easy it is rated, I shake like a cold chihuahua when I do it.

Recently Cam, Jimmy and I climbed Sunnyside Bench. The hardest thing on the route is maybe 5.4. Maybe. It’s 3 pitches, almost 400 feet and then we walked up to Middle Earth–the place between Upper Yosemite Falls and Lower Yosemite Falls.

We started up the gully and came to the first pitch. It looked pretty doable without roping up so I said we should just free solo it. Jimmy went first. I went second–well sort of.

I started up and with the first move up across a rock, I was super afraid. I looked down and saw Cam watching me. I was maybe 15 feet above him but it felt like he was so far away. I started to freak out. Cam finally talked me into trying the move and I did it. I got up higher, close to the end of the pitch. I was in this weird chimney. I was standing on loose rocks. I had to get high feet and reach over the top of the rock to a sloper and then I could reach the jug. When you are new at free soloing or even leading anything less than a jug can feel as though you can’t hold it. I had Cam come up to join me and he went first.

I’m a solid 5.10b/c climber on top rope. I’ve lead up to 5.8 on trad. Sunnyside Bench is 5.4. That being said, I had them throw the rope down to me and belay me up the last 15 feet of the first pitch. Talk about being humbled and demoralized. Oh and did I mention that I was crying the entire way up? Not just crying, but yelling and cursing too. I sound pretty cool, right?

I got up to the top and just sat there super disappointed in myself. I was supposed to lead the entire thing because come on, it’s 5.4 and I’m still trying to break into leading.

I told my wonderful boyfriend Cam that he should lead everything because I wasn’t in a good mental place to do it. To which he replied, that is exactly why I should lead it. Begrudgingly, I agreed.

I got on the sharp end and was ready to go on pitch 2. Jimmy soloed it yet again. I lead it and didn’t place a single piece. It was so chill. Even the “tricky boulder problem” was a snap. I felt better. Not placing on lead is soloing. But knowing I could place at anytime made me feel a lot mentally stronger.

Until the last pitch. You can do the 5.4 face or the 5.5 gully thing. I did neither. I was so afraid and obsessed with placing that if I looked up 10 feet and didn’t see a crack I would freak out and start crying. I would yell down to Cam that I was scared and he kept telling me that there was nothing anyone could do for me, I’d have to figure it out for myself. Which I already knew of course. But sometimes just having someone talk to you when your scared really helps. It helped me not bail.

So I went this weird way where I had to traverse a couple times. Talk about rope drag. It was so bad that it felt as though there were two people swinging on the rope trying to pull me down. With the moral support of Jimmy above me (he free soloed it; making his first ever multi pitch completely ropeless), I somehow made it to the top. Once we got to the top I felt better. Even though it was a less than perfect situation I still got up it and didn’t bail.

We got to Middle Earth and it was beautiful. So worth the tears and fear to get up there. 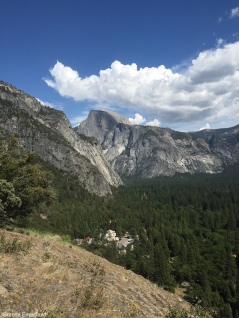 View of Half Dome from the top of Sunnyside Bench.

Recently, I’ve been reading a couple books. One of which is The Rock Warrior’s Way by Arno Ilgner. In the book, he talks about your ego. He talks about how your ego can limit your climbing because you don’t want to fail and have your reputation injured. He also talks about breaking the habits of telling yourself you can’t do something or finding excuses to say “If I had better footwork I could climb harder.” That is mentally limiting because now all you can think about is how much your feet suck. So even if you are totally capable, you have already convinced yourself that you can’t climb it.

I do this so much. I have a bit of an ego. I want to climb hard because I’m a loser if I don’t. I feel as though I would be judged for being scared on Sunnyside Bench, because come on 5.4, really Brenna? But these are the exact thoughts that poison your mind and suck the fun right out of climbing. Instead of laughing and having a good time and being scared but screaming it out and moving on, I was stuck deep in my ego that entire morning.

Another point in Ilgner’s book is if you climb 5.14 it doesn’t necessarily make you a better person than a 5.7 climber. I have fallen victim to this and this is why I get intimidated by better climbers. I feel as though they are cooler or I’m liked less because I can’t climb as hard. But this is completely the ego playing into my emotions and it’s hard to see past it sometimes.

I’m sharing this because this isn’t an experience anyone really wants to admit. But I don’t want my ego to control me. I want to climb to have fun and whether that means that I rope up every time I do Sunnyside Bench or not, I’m not going to climb unless I’m having fun. No more taking myself seriously.